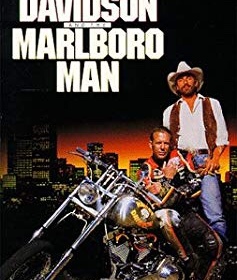 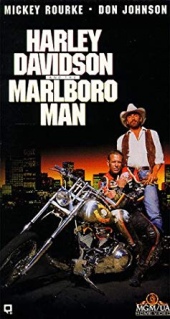 I love bad movies! Well, movies others think are bad anyway. I’ve watched Harley Davidson and the Marlboro Man several times. I don’t own it but it’s available for streaming here and there (on VUDU free with ads at the moment) and I enjoy the action and back and forth between the two leads.

Mickey Rourke has been a favorite actor of mine since 9 1/2 Weeks, a completely different kind of movie, which was 50 Shades long before that movie came about.

Don Johnson is still a good actor nowadays and I still have a place for Sonny from Miami Vice in my head.

The film was a critical and financial failure, earning only $7 million at the domestic box office (the budget was estimated at $23 million). It has since become a cult classic following its release to video.

Two guys who know each other so well that they don’t see each other for two years and fall right back in step. Men showing up and having each other’s backs because that’s just the way it is. This is part of why I love the movie.

The action and the violence gives it a decidedly 80s tone even though this film was made in 1991.

Reportedly Rourke says he felt like a sellout making this movie and that it started his decline into self loathing. It a quote but something I picked up from IMDB. Who knows?

I was glad to see him show up in The Expendables, another testosterone driven “your my friend, no your my brother” type film.

I’ll keep watching all these movies others deem as unworthy.

I came to be entertained not to experience an emotional change or some other fluff.

This site uses Akismet to reduce spam. Learn how your comment data is processed.

When the cat’s away...
Add this to the week. AND we're just getting started. Lol. Just a minor problem. But it happened, and I'm told if there aren't pics, it didn't.
Up front. #FreeGuy #amerchlife I miss putting together these big displays.
One staked his claim to the seat beside me and the other is mad she didn't beat him to it. A Tale of Two Kitties. #cats #catsofinstagram
I got to go to the mall today. Hash Brown I'm Just The Bodyguard/Driver @goobiefortytwo
17 years and one big adventure. Happy birthday to my favorite daughter, @redparker42 I love you!

If you want to be a hero well just follow me

The Musings of a Writer / Freelance Editor in Training

The goal is to help make people’s lives easier

Understanding why I allowed this